The information was released by Chairman of the Provincial People”s Committee Nguyen Huu Hoai at the meeting with related departments, some businesses, travel agencies, hotels and restaurants in the province on May 15th. 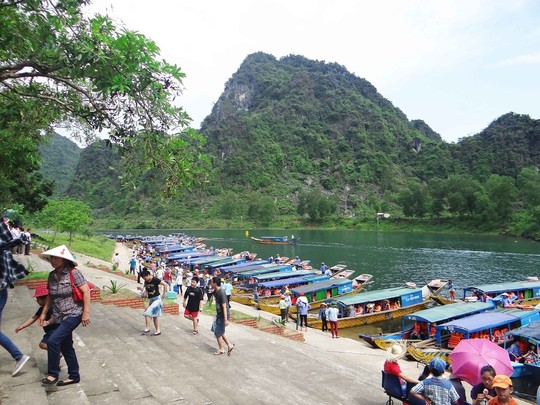 In recent times, mass fish deaths have seriously affected to tourism activity in the province. According to preliminary report, from April 6 to now, number of tourists to Quang Binh have fell by over 50%, hotel occupancy rates have dropped by nearly 50% from the same time in 2015. In a recent four-day holiday marking National Reunification Day (April 30) and May Day alone, number of tourists reduced by 44%, capacity of using rooms decreased by 34%. In addition, cancellation of tours accounted for arround 50%….
At the meeting, representatives of related departments, businesses, travel agencies, hotels and restaurants focused on discussing some solutions to attract tourists, helping solve difficulties for businesses, such as a 20-30% discount of entrance fees at tourism destinations, a 10-20% cut in environmental service fees; decrease of business income tax; organization of tourism promotion in provinces and cities; announcements of test results of seawater…

Speaking at the meeting, Chairman of the Provincial People’s Committee affirmed serious damages caused by the recent mass fish deaths with unknown reasons to the province’s tourism sector.

In order to attract tourists to Quang Binh, Chairman asked the Department of Natural Resources and Environment, Dong Hoi City to make daily announcements of test results of seawater to ensure it is safe for swimming on the mass media.

Besides, Chairman also announced a 30 percent cut in entrance fees for three caves of Thien Duong, Phong Nha and Tien Son from the end of this year. The new prices will apply only for guests who stay at any hotel in the province during five days.

The People’s Committee has also called on hotels and restaurants to reduce prices by 30-50 percent and 10-20 percent respectively to attract more tourists.

On the other hand, Chairman also urged the related agencies to propose the plan to cut taxes and provide low-interest loans for its tourism companies, hotels, restaurants…

The province committed to created all favorable conditions for hotels and restaurants in the province, contributing to socio-economic development, helping tourism become a key economic sector of the province.