Over the past three months, over 35,000 people, including 7,000 foreigners, explored the cave, a 2.2-fold increase from the same period last year.

Tien Son cave, which is a few hundred metres away from Phong Nha cave, is a preferred destination due to its easy connection with other tours during visitors’ journey aimed to discover the national park, namely Chay river-Toi (park) cave, Sinh Ton valley-Thuy Cung cave, Mooc stream-Thien Duong cave. 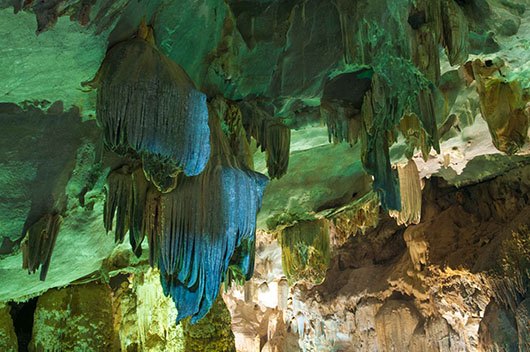 A contingent of proficient tour guides and a new light system installed recently made it easier for visitors to the cave, Director of the Phong Nha-Ke Bang Tourism Centre Le Thanh Loi said.

Covering 123,326 ha, the Phong Nha-Ke Bang National Park was recognised by UNESCO as a World Natural Heritage site on geological and geomorphological criteria in July, 2003.

The park is home to a large number of faunal and floral species, including threatened species such as tiger, Asiatic black bear, Asian elephant, giant muntjac, Asian wild dog and the recently discovered sao la.

Recently, a group of locals in the province believe they have discovered a new cave, adding to the province’s already extensive network of caverns.

The group, who was on a trip to do wood work from the province’s Phuc Trach commune, said the cave’s entrance is covered by forest trees in the territory of the Phong Nha-Ke Bang National Park.

The newly discovered cave is said to be 3km east of Thien Duong (Paradise) Cave and 300m above sea level.

According to initial accounts, the new cave is said to be on the same grand scale as Paradise, is very long and has an inner stream.

The discovery comes as Quang Binh has been catapulted onto world travel lists as one of the most coveted destinations for cave explorers.

Son Doong, which was discovered in 2009, is said to be the world’s largest cave, according to the British Cave Research Association.